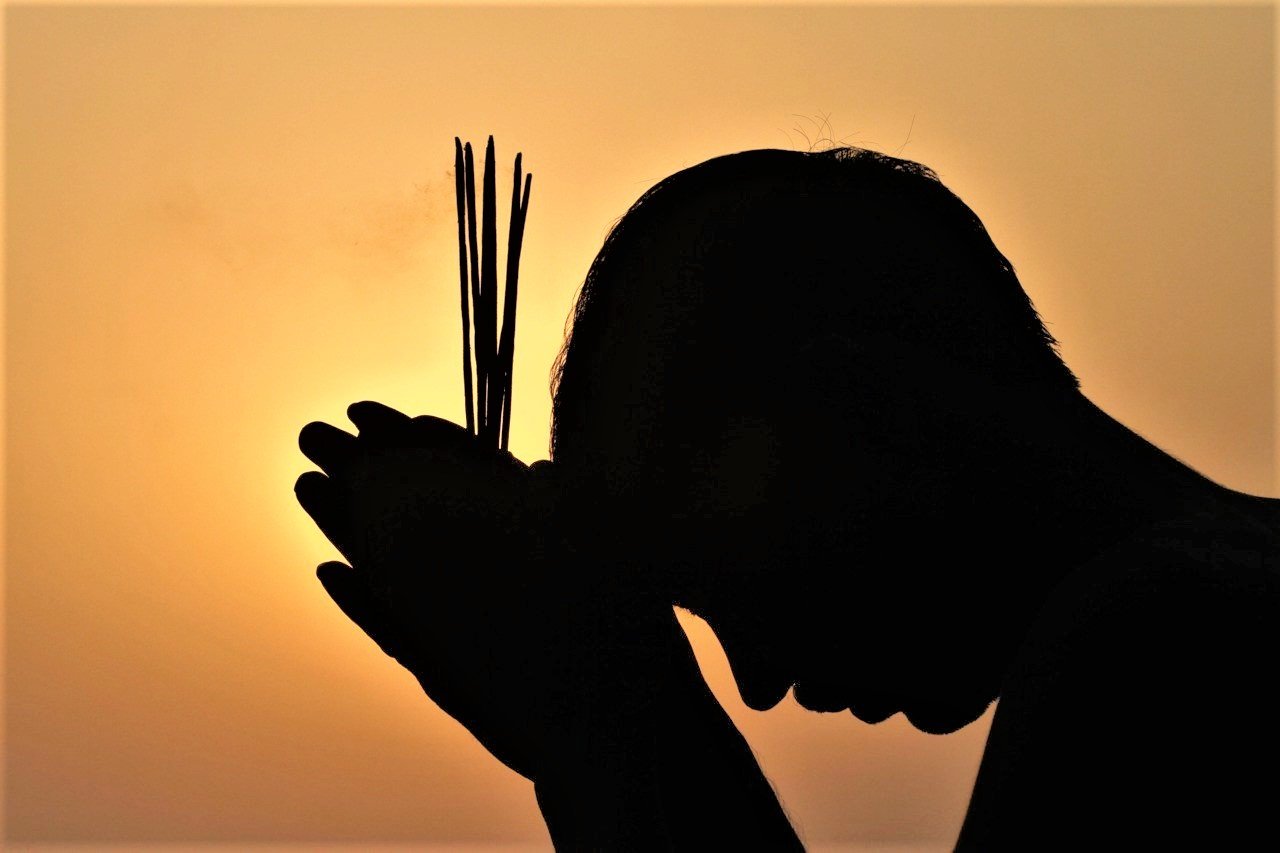 The usual morning routine and ‘Pooja’ (prayer) is as follows :

-Wake up time is around 5 am, right before sunrise.

– Next one takes a shower and freshens up.

– After that simple exercise in the form of yoga poses is done (like Surya Namaskaar).

– One then dresses up for the day which includes putting red dot between the eyebrows by pressing that part with the ring finger.

– Next, they give water to the Tulsi plant.

– Then they enter the ‘Pooja’ place, where they chant OM, mantras, light incense, ring the bell, maybe blow conch.

– On special occasions one sings devotional songs along with musical instruments.

– Lastly, one takes some ‘Prasad’ (sweet or fruit that was offered to God) and starts their work day.

Prayer is not just a feeling or a chore. It has a very scientific approach. Presenting the scientific reason behind each morning practice, in the words of Dr Madhu Bhatnagar

Since my childhood, I have been observing my mother and grandmother worship many Gods and Goddesses. They used to perform certain rituals on daily basis. As a child, I found some of them quite amusing, but as I started understanding the scientific reason behind them, they became very logical and easy to follow. It was easy to see how my illiterate grandmother and semi-literate mother were very scientific in their approach towards life. I have tried to explain the reasoning behind these ‘mundane’ rituals and how they are so effective in helping us have a balanced and happy life.

“Early to bed and early to rise makes a man healthy and wise” sounds cliche, but the old adage followed by Yogi’s and Saints, still holds the same effect on human body and mind. The day begins early with sunrise for those who try to lead a disciplined life. After shower and freshening up, the day starts with early morning exercise in the form of yoga. It helps in good blood circulation, stretches the muscles and tones them by increasing their flexibility. It incorporates the prays to the Sun God. During the daytime, the rays are direct and harmful UV rays can damage the skin and eyes. The morning Sun rays are soothing and energizing. The slanting rays of the Rising Sun infuses heat and positive energy in the cells and gears them up for daily routine.

While getting dressed for the day, Sandalwood or Vermilion Teeka (Dot) is applied right in the center of the forehead, which is the point of our Agyachakra (one of the energy center vortex’s in the body). The pressure applied on Agyachakra, while putting the Teeka, between the eyebrows, activates the point of forgiveness and has a cooling effect on the mind. Offering water to the Tulsi (Ocimum Sanctum), is basically ensuring the survival of humans, along with learning a lesson in interdependence. Tulsi has tremendous medicinal value and can usually be found in every household.

Once inside the ‘Pooja’ room / place, they would like incense sticks. The smoke from incense sticks (Agarbatti), and Dhoop, drives the insects away. Use of bell during the prayer, creates soothing sound waves that have lingering impact of soft musical instrument on human mind. Pooja begins by chanting ‘OM’. Maximum amount of air enters into the lungs while doing chants. No other ‘swara’ or ‘vyanjana’ of Hindi varnamala can ensure as much amount of oxygen during inhalation. It helps in focus and calmness of mind to take on the day. Some people also blow air into conch, during puja. This helps in increasing the vital capacity of lungs. It also creates vibrations that reverberate in Cerebrospinal Fluid present in central nervous system. As already proven by science, Cerebrospinal Fluid helps in circulation of oxygen, nutrients etc. to the nerve cells.

We know that music is the soul of life, so singing devotional songs with instruments like Harmonium, Sitar and Veena etc stimulates the secretion of a stress relieving hormone, Endorphin. Pooja generally ends by eating ‘Prasad’ offered to God. Actually it is a method to energize the body in the morning, by taking small amount of natural sugar in the form of Prasad. We know that cellular energy; ATP can be generated, only when there is some food available for oxidation. The nutrients present in Prasad (fruits or any other sweet) becomes an instant source of energy. Exercise coupled with food increases the basic metabolic rate and one gets charged with energy to perform the duties of the day without getting tired.

My grand mother and mother’s simple daily ritual had a scientific benefit on their health, mind and body. When one is aware of the reasons behind each step, it makes sense to be more disciplined about it. After all, we only are the beneficiary of it all.