Kids Korner
The Geese and the Talkative Tortoise
Share 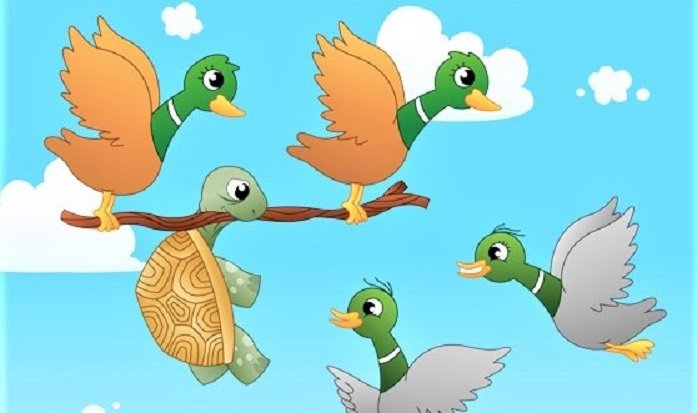 Moral of the Story: Don’t be impulsive. Think before you act

Once upon a time, there were three best friends. Two geese Bella and Bianca and a tortoise named Leo. They lived by the river side. They would find food together, play together and had a lot of fun. Leo was the most talkative among all. Bella and Bianca loved his stories. Once, due to drought in the region, all the rivers, lakes and ponds went dry. There was not a drop of water to drink for the birds and animals. They began to die of thirst.

Bella and Bianca flew to great lengths to find some other source of water. After several days, they found a distant lake which was full of water. The three friends decided to move to that lake. The new place was very very far away. It was easy for Bella and Bianca to fly there, but it would take Leo several months to reach there.

After a lot of brain storming the three friends came up with a solution. Bella and Bianca will hold a strong, thick piece of wood and Leo will hang on to the wood while Bella and Bianca fly to the lake. It was a brilliant idea, but Bella and Bianca were worried for Leo. They knew how much Leo liked talking. If Leo would even open his mouth while flying, he will definitely fall to the ground and get badly hurt. They shared their concern with Leo to which he promised not to talk until they reached the lake.

The next day Bella and Bianca held the stick ends in their beaks and Leo held the stick in the middle with his teeth and thus, they began their long journey.

They flew over hills, valleys, villages, forests and finally came over a town. Seeing this strange sight, all the men, women and children in the town came out for a better look. They were all pointing towards the three friends and excitedly talking. Leo felt very special at all the attention. He wondered if Bella and Bianca noticed the commotion below. In excitement he forgot his promise about not talking during the flight and opened his mouth to tell his friends to look down.

Unfortunately, as soon as he opened his mouth, he fell down on the hard ground and hurt himself. Had Leo kept his promise and not talked before reaching the lake, he would not have hurt himself.