Benefits
Science behind Dot (Bindi) on the Forehead (Part 1)
Share 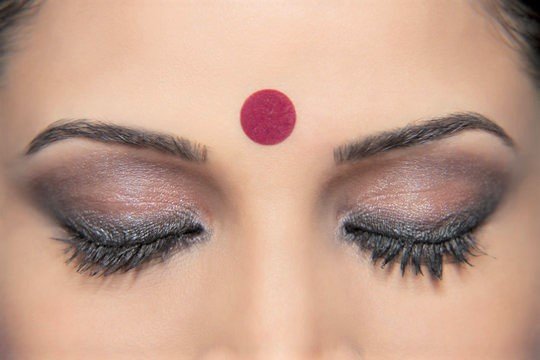 ­­Synopsis: The space between the eyebrows is a major nerve point in the human body. It plays a very important role in the functioning of our Endocrine and Nervous system. In the article Science behind Dot (Bindi), we will learn how applying kumkum is considered to activate the center for health and healing.

There is a very important energy spot on the forehead, between the two eyebrows. This point is also the seat of Agnya (Ājñā) Chakra and it has been a common practice (by men and women) to put a red dot (kum kum) over it to stimulate it. As explained in the ancient texts, there are several energy vortexes in the body and the Agnya (Ājñā) Chakra is the 6th energy center. Per quantum physics also all the activities in our body are controlled or regulated by energy or are energy driven processes. Agnya chakra is the command center of the body and is also called the Third Eye. It activates our intellect, intuition, wisdom and knowledge.

The practice of using KumKum at this point is not related to any religion or culture, rather it directly stems from science and well being of our mind and body.

Agnya (Ājñā) chakra is connected to our Pituitary Gland and Hypothalamus. Pituitary gland is also called the ‘Master Gland’ and is part of the Endocrine system. The endocrine glands release certain hormones. Pituitary gland controls and regulates these glands in the body.

Nervous system and endocrine system are the two main systems which control and co-ordinate each and every activity of our body. Pitutary gland and Hypothalamous together act as a connection which control and regulate our brain, chemicals, thoughts and actions. Applying (pressing and massaging) KumKum on this spot, stimulates both of these glands. Thus all the other glands are automatically regulated by the activation of these two glands. When all the glands operate at their best, it means the body and mind also act in the most optimum manner.

A blockage in the path of energy flow or in the path of those chemicals which are being circulated to all the body parts, means that the Agnya (Ājñā) chakra is not properly stimulated. The blockage can lead to psychosomatic disorders like anxiety, insomnia, headache and concentration deficit. By properly stimulating the Agnya (Ājñā) chakra, all the body parts function properly.

What is KumKum made of

Kumkum is made by mixing turmeric and lime. The yellow mixture gradually turns red within few hours. Turmeric has certain qualities that are very useful for human body.  Due to the hygroscopic property of turmeric, it absorbs any excess liquid or mucus. This mixture has anti bacterial and anti inflammatory properties, thus reducing the risk of bacterial infections.

Significance of the color Red

Color red has the longest wavelength, at around 700 nanometers. Red is a warm and positive color associated with our most physical needs and our will to survive. It is associated with energy, strength, power, determination. It also enhances human metabolism, increases respiration rate, and raises blood pressure. The color red awakens the physical life force and positivity in the body.