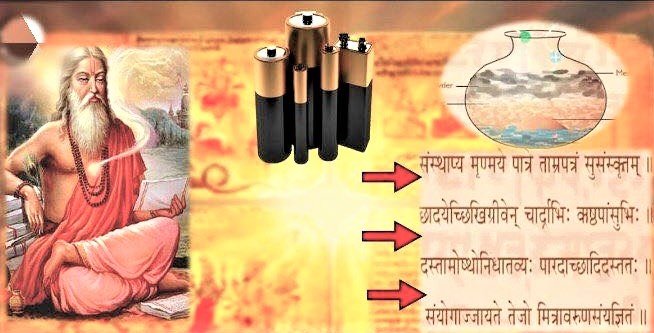 Synopsis:  Mention of battery and electricity is found in the Ṛgveda. In this article we explore the references and different kinds of electricity from the ancient text books. We will also learn the method of making battery some 3500 years ago and compare it with our modern day batteries.

Electricity has become an important part of our life. It is quite impossible to imagine life without electricity now a days. Electricity from thunder and lightning has also fascinated us since primitive ages. We are still working on how to safely store and use the enormous electric energy discharged from thunder and lightning. We have ample evidence which proves the use of electricity and battery way back around 10000 – 8000 BCE.

People in ancient times were well aware about electricity . Electricity has been cited in the 5th Mandal of Ṛgveda. Example : Oh people! The day and night can be spent in comfort, if electricity and fire, just like the Sun God are used tactically.

The three main sources of Light and Energy mentioned in the Ṛgveda are :

Henceforth, it can be assumed from the above verse, that use of Sunlight during day time and Electricity at night was used during the Vedic age.  The great Sage Agastya mentioned the process of making Battery in his composition Agastya Saṃhitā  (around 8000 BCE).

Ingredients to make a Battery

Method of making a Battery

Take a clean earthen clay pot, insert copper plate and Śikhigrīvā  ( शिखिग्रीवा ) in it. Add porous wet saw dust in between. Put mercury combined with zinc sheet over it. Combining all these together and then connecting it to a wire generates Electricity.  Electricity is named Mitrāvaruna Śakti  ( मित्रवरुण शक्ति  ) here in the verse.

Comparison with a Modern Battery

In a modern battery, materials are placed in a specific manner in a Plastic Container (like Pot). It contains positive and negative internal plates, made of Lead (like Copper Plates). Both these plates are separated via Porous Material (like Saw Dust). A solution made of Sulphuric Acid and Water, called Electrolyte (like Mercury amalgamated Zinc) completes the battery. When wires are attached to it, electricity is generated, just like in the battery made by Sage Agastya.

Mr Hole, a prominent scientist and his friend experimented according to the method mentioned in the above verse from Agastya Saṃhitā  ( अगस्त्य संहिता ). After consulting a master of Ayurveda to determine the meaning of Śikhigrīvā, they used copper sulphate (CuS04) due to its similarity with Śikhigrīvā in color . They made a cell per Sage Agastya’s procedure and measured it with a digital multimeter. The open circuit voltage of the cell was 1.38 volts and short circuit current was 23 mili amperes. After successful experiment of the method, the cell was exhibited in the fourth annual general conference of Swadeśī Vijñana Saṃśodhana Saṃsthā ( स्वदेशी विज्ञान संशोधन संस्था ) on 7th Aug 1990 before many eminent scholars. It was recognized and accepted as an electric cell.  Bhā. vi. ujja. para. Chapter 4   Page 34

Thus, it can be concluded that the method and scientific knowledge of electricity generation was known to the sages and seers in ancient times. Indian scientist Mr Rao Sāheb Bajhe named the different kinds of electricity according to the methods of their generation mentioned in Agastya Saṃhitā.

Electricity is also described in Mahābhārata composed by Vedavyāsa. The great sage Vedavyāsa described the method of generating electricity from the atmosphere. According to Aṣṭāvakropākhyān, during a debate, King Janaka asked the sage Aṣṭāvakra, ‘Who amongst the deities holds the womb of those which are attached like two horses and which falls suddenly like a hawk? And which womb is created by these two ?’  Aṣṭāvakra answered, ‘Oh King ! May these two don’t fall on the roof of your enemy’s home. The deity of  (as !) clouds is the holder of the womb of those two whose charioteer is Vāyu or wind. And these two are the creators of womb like clouds

The two technical terms ‘Rayi’ and ‘Prāṇa’ are used to mean ‘Positive’ and ‘Negative’ charges in ancient language. These are always in compound state together naturally. The compound state of these two are collectively called Electricity. This negative and positive charge is carried by the clouds like a womb. Friction between clouds generate electricity and thunder comes down because of the gravitation like a hawk. It is prayed that it may not be strike the roof of even our enemy because it burns everything in ashes at a glance.

Thus is can be assumed that Aṣṭāvakra was familiar with the scientific process of how electricity was created in the atmosphere. William Wall , an eminent scientist from Britain, said in 1708 that the spark in the clouds is caused by a highest scientific process. According to which if the electricity is discharged by taking an electrified thing near a driver, it creates a spark between those two. Fifty years after this , a scientist named Benjamin Franklin from America proved the process of creation of spark in the clouds through an experiment. It is available in the Junior Science Encyclopedia, Volume IV,  Page 188. The process of spark generation in the clouds, which has now been established by modern scientists, was already mentioned in Mahābhārata around 6th century BCE.

There is a lot of proof to conclude that the scholars and sages were well aware about the generation, classification and use of electricity in ancient times. People were encouraged to generate and use electricity  for a comfortable life. Our scientists can explore, learn and rediscover newer horizons of inventions, if they can take inspiration and knowledge from our glorious past.