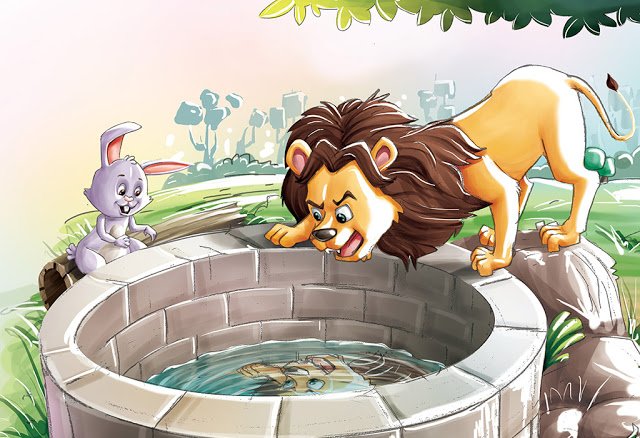 Moral of the Story : Being smart and clever pre-dominates over strength and power

Once upon a time in an old forest there lived a majestic and somewhat greedy lion. He instilled fear in everyone around him and hunted every day. Even when he wasn’t hungry the lion would take great pleasure in hunting and soon, the number of animals in the forest started to thin out.

The animals spoke with one another and decided to offer the lion a deal. They would sacrifice one of themselves each day for the lion to survive so that both predator and prey could live in some harmony. The lion would agree to this deal and it was decided that one animal would be sent to him as a meal each day forward.

This continued for a time until a young rabbit was selected. The rabbit was smart and did not want to be eaten by the lion. He wanted to get rid of the lion entirely. He took his time and even took a nap along the way to see the lion. He reached the lions den by sunset when the lion grew hungry.

The lion spent the whole day impatiently waiting for his meal – the rabbit. When the rabbit arrived he was enraged.

“You’re much too small for a meal and you’ve made me wait all day, I’m going to teach the animals a lesson by killing them all!” The lion roared.

The rabbit kept his cool and spoke to the lion calmly.

“Oh mighty king, we have sent 6 rabbits to you today but on the way, they were stopped by another lion who said he was the new king. He kept the other 5 for himself and told me to relay a message. You must leave the forest now or he will kill you.”

The lion grew even more angry, insisting the rabbit take him to the other lion immediately. The rabbit agreed and led the lion down to a well. “He lives inside this fortress of a den” The rabbit said to the lion.

When the lion peered into the well, he saw his reflection in the water. He thought it was the other lion. He roared loudly into the well and heard back the echo, thinking the enemy lion was challenging him for a fight. Full of fury and rage, the lion immediately jumped into the well to kill the enemy lion. As he dove in, he hit his head on the side of the well drowned.

The rabbit rushed back excitedly to share the good news with rest of the animals. They all thanked the clever rabbit and lived in peace once again.